skip to main | skip to sidebar

I really don't want to talk about it.

To the surprise of a few evangelicals, God hasn't wiped the US off the face of the earth for re-electing Barack Hussein Obama.  I didn't vote for him, so no, I'm not happy with the outcome of the election.  However, I'm not calling for recounts, threatening to leave the US, or demanding secession.

Here is what I feel about the whole issue:

That's it. I don't want to hear your drama and whining on the issue. You should have campaigned harder for your country starting years ago.

Do you think the US has become an immoral cesspool?  Then you should have raised your kids better, been better examples to your neighbors, and voted for whatever it is you believe in years ago.

Do you think the US has a corrupt business system?  Then you should have lobbied against whatever you have a problem with and led by example in running your business the way you believe.

Do you think the US education system is a joke?  Then you should have joined the PTA, gone to every open school board meeting and / or run for positions on the school board, raised your kids better, and been a better example to your neighbors.

It's our own fault.  Period.  (Apologies if it's not your fault.)

If you want a certain group of politicos gone, vote them out. If you are the only voice, proselytize.  Get out there and convince others you're right and to support your cause.
Posted by The4th at 2:16 PM No comments:

Today is Monday, 15 October, 2012.  I spent the weekend in Monroe, Louisiana at my uncle's funeral.  I felt like I needed to write about life a little so pulled up my blogspot page and found this draft from 2008.  It will remain unfinished for now, but I will go ahead and publish it incomplete.

I apologize for the 4 year delay in updates!

The overcast skies from the past couple of days finally let loose with gusto in the wee hours of the morning. I woke to hear my first Caribbean rainstorm, smiled, and went back to sleep. Another quick deluge around 9 brought me around for the day. 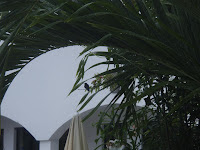 Walking outside to a damp, still dripping morning, I noticed some movement in the bushes near the room. Straining to see what was causing the little branch to move so much, I caught a glimpse of a tiny body vibrating a mist of water from iridescent green plumage. It was a hummingbird.

Yes, I grabbed the camera.


He must have found me fascinating as I was able to get within inches of him. 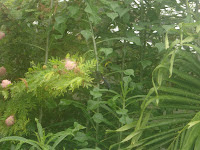 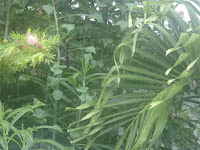 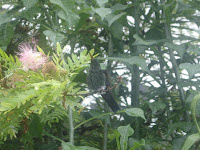 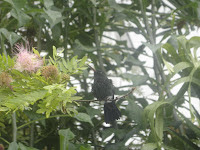 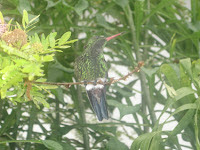 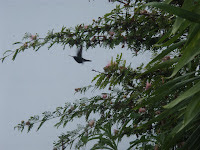 When he was finished looking at me, he flew away.

Given all that I saw of Tobago the day before, I decided to keep the car a second day. After a quick breakfast of local fruit and delicious dried sausage I smuggled in from Penshorn's Meat Market in Marion, Texas, I took a trip down to the car rental place and extended the contract.